How To Experience A Shift From The Undesirable Nature Of Depression

A client once expressed their image of depression with an image.

They told me they had depression and during my talks with them, they sent me the image which they said showed how they experienced depression (what it felt like for them).

Before I continue, from what my client described of her depression and what I have read about other people’s experience of depression, it can be a highly undesirable experience which happens on a minute by minute, hour to hour and day to day basis.

My words below mean no disrespect to anyone’s experience if they experience mild depression to it being the feelings described as of a dark cloud engulfing people’s experience of life and debilitating them.

On writing this I have been studying personal transformation and healing for over 12 years, and with foundation information and results from experiments in quantum physics, and how the nature of our reality works, the results show that this reality is simply not as real as it seems.

As unreal as that may sound, my following words may sound just as unreal but I strongly believe that I can help create ‘real’ shifts in a person’s experience of depression if they are really committed and willing to put in the time and effort.

Getting back to the image that was sent to me, the experience of depression has been described as below. 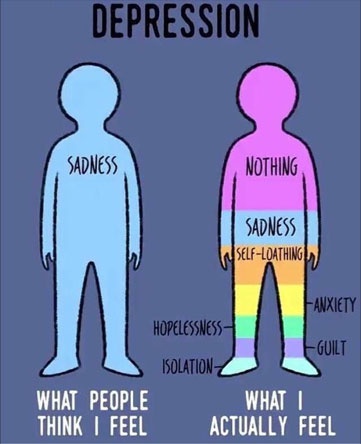 People having depression describe their feelings from at best feeling nothing (numb), to other negative feelings labeled in the image above.

From knowing how our reality is created at the quantum level (inside atoms and molecules which make up everyone and everything in our universe), there is a container of the universe which scientists call the zero point field or consciousness.

This field or consciousness is in you, me, everyone and everything else in the universe.

It is the same field or consciousness that ‘contains’ the whole universe.

You are actually the field or consciousness, or a part of it if that helps you accept your individuality.

When you look inside the atoms, there is actually nothing physical there. Scientists have only discovered tiny swirls of vibrating energy at this quantum level.

And it is these tiny swirls of energy that make up you, me, and everyone and everything else in the universe.

So, your thoughts, emotions, body sensations, your body, other people and other things in the universe whether human-made or not, are all made up of tiny swirls of vibrating energy, and not anything physical.

You are experiencing thoughts, emotions, body sensations, your body, other people, things and the universe as the field or consciousness, or as a part of it.

Referring to the image above, the labeled undesirable thoughts, emotions and body sensations of people having depression (or anyone experiencing an undesirable situation) are simply vibrations of tiny swirls of energy that we give labels to.

Again, if you have had or have had depression, I am not disrespecting any suffering you may have experienced, but my words above describe what you are experiencing at a fundamental level of our reality.

So, the image above can be re-labeled as below. 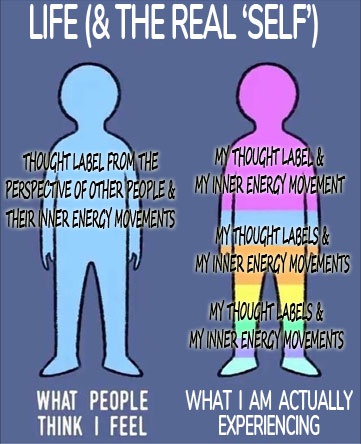 Now, the above labels may sound fantastic, awesome, wonderful and other such descriptions for anyone having depression, but how can someone actually experiencing depression actually make practical use of the above information?

Well, in brief, your awareness has to be taken away from the undesirable thoughts and feelings, and any outer situation that may be contributing to depression.

There is too much detail to go into than I can write here, but I have developed deeper information and exercises to take your awareness away from the undesirable nature of depression.

Commitment and regular practice can help dissolve the intensity of the situation of depression.

Considering what people with depression have said to me, their undesirable thoughts, emotions, and sensations seem to the main aspects of depression, with the outer situation of other people, things and the world contributing less or not at all to their depression.

So, what if there was a possibility of depression being experienced like this: 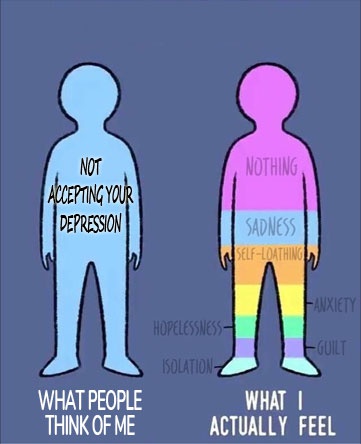 Would you take the opportunity to reduce the intensity and/or effect of undesirable thoughts, emotions and sensations and what people thought about you?

Would you commit the time and effort no matter how long it takes to learn information and exercises to reduce the intensity and/or effect of undesirable thoughts, emotions, and sensations in your day to day experience of life?

Would the space created from the undesirable nature of depression allow you to enjoy more freedom, joy, and growth in life?

If you answered yes to any of those questions then I invite you to take a free introductory course, after which you can contact me directly to go deeper into helping reduce the undesirable nature of depression.

If what I described resonates with you in any way, and you really know you want to and can make the time and effort, click here to learn more and make a start with an introductory course. You can then contact me to go deeper.