The Bhavani Talwar (Sword). About Location And Viewing

In 2010, a guest from India informed me that he wanted to see Shivaji’s Sword, the Bhavani Talwar, and suggested that perhaps it was displayed at a British/London museum.

As I had no information of the sword, nor had actually heard of it, I researched the net and found a succinct summary:

One of the swords of Shivaji Maharaj is now in London, in Royal Collection Trust of Royal family of Britain.

This sword was presented by Shivaji IV of Kolhapur to Prince of Wales in 1875 AD.”

Hence, I thought it may be in the Royal Collection, held in trust by the Queen of England and so I contacted The Queen’s staff in an attempt to locate the sword.

The staff informed me that the sword was not in the Royal Collection and so I asked if they could help locate it. I was informed that did not have any more information.

Since then I had a few replies on my old site and as I was moving the content from the old site to this site, the commenting system on the old site and the discussion about the location of the Bhavani Talwar had ceased.

However, after looking at the site access statistics, 3 years later in 2013, I noticed that people were still looking for information about the Bhavani Talwar and so I assumed that it had not been located.

I again did a quick search to see if there was any recent news about the Bhavani Talwar and it seemed that there were more pages and discussions about it but what really stood out was a photo of the Bhavani Talwar that I did not see back in 2013.

The photo (below) seems to be taken by a Citizen Journalist by the name Raju Sanadi for Meri News. 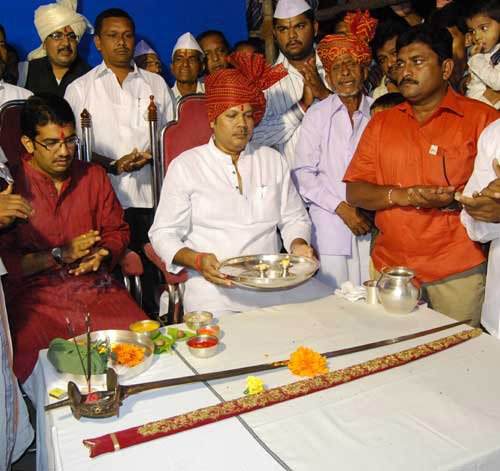 The photo seems to be taken during the Bhavani Talwar Puja by M.P. Udayanraje Bhosale at the Dussehra festival in Satara, Maharashtra, India where, it was stated, that M.P. Udayanraje Bhosale, the 13th direct descendant of Chhatrapati Shivaji Maharaj and Udayanraje’s cousin MLA Shivendra Raje attended the procession for the first time.

The statement seems to confirm Vivek Kale’s comment below stating that the Sword is still with Udanyanraje Bhosale’s family in Satara, Maharashtra, India.

Therefore at least it seems that the Bhanavi Talwar exists but as the photo or comments about the sword on Meri News did not seem to have a date or means of contacting the journalist Raju Sanadi, I have reposted the article and previous comments here and the comments system on this site is switched on so the discussion can continue.

However, when was the above photo taken and is the Bhavani Talwar in India, London, or elsewhere.

It would nice to contact my guest again and let him know the actual location of the Bhavani Talwar so that he and others with interest can view it.

Therefore if you have any interest or information about the now location of the Bhavani Talwar, or whatever name the sword/talwar is being given and how it can be viewed then please share your comments below.

A link was submitted anonymously below to a YouTube video of which the description states that the sword of Chhatrapati Shivaji Maharaj called “Bhavani Talwar” is kept and preserved at the Albert Museum in London, UK and that the real name of this sword is “Jagdamba Talwar” and not the “Bhavani Talwar”. I had posted the video below but on checking again on 22th August 2016, it has been removed from YouTube.However, I found two other videos which may be of interest.

However, I found two other videos which may be of interest.

Video 1 seems to be of a Bhavani Puja ceremony, and perhaps not the same ceremony has the one in the photo above as the scene seems to be different.

NOTE: The video has been removed since writing this post.

Video 2 seems to have a commentary about the Bhanavi Talwar and other historic and perhaps current information. The commentary is however in a language I am not familiar with. Anyone familiar with the language? If so, can you write a translation in the comment section below?

Do you have any information?

We would appreciate any further knowing you may have about the Bhavani Talwar. Please leave your share or comment below.